The Halloween Trilogy: An Online Performance 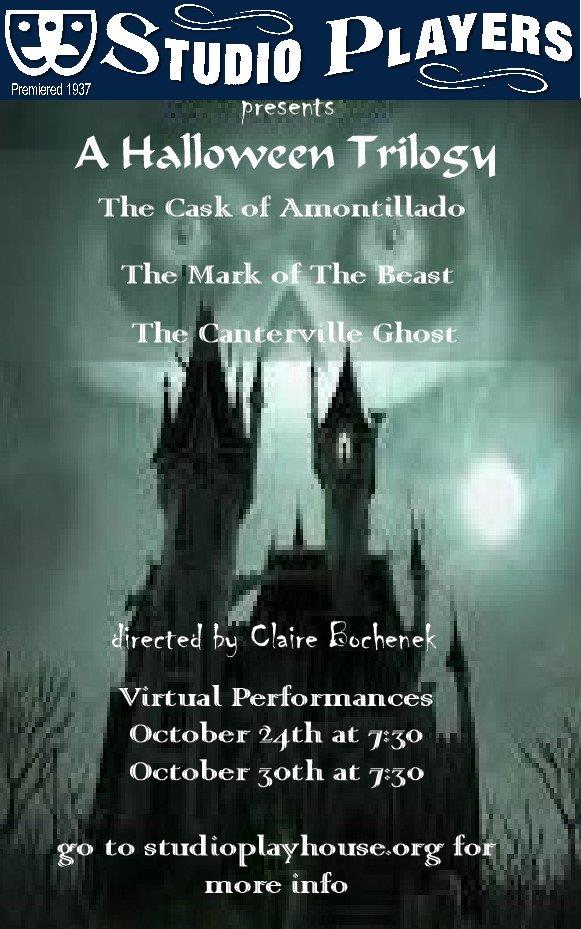 October 24 and October 30 at 7:30 pm. Video will be viewable right here on the Studio Players website. The performance is free, but please consider a donation to Studio Players to help us with the upkeep and maintenance of our 100+ year old facility.

The Mark of The Beast

Adapted from the novel by Rudyard Kipling

Fleete, a landowner newly arrived in India, overindulges in alcohol at a New Year’s party, and commits an outrage against the Indian ape-god Hanuman by grinding his cigar into the forehead of a temple-statue in Hanuman’s likeness.

CAST: MARK OF THE BEAST

Adapted from the novel by Oscar Wilde

The Cask of Amontillado

Adapted from the short story by Edgar Allen Poe

The story of a man named Montresor who decides to seek revenge against a man named Fortunato, who has insulted him. He meets Fortunato at a carnival, lures him into the catacombs of his home, and buries him alive.

Produced by special arrangement with THE DRAMATIC PUBLISHING COMPANY of Woodstock, Illinois.